MULTIPLE COLORS & STYLES meet all your needs. Perfect to match with corsets and sexy lingerie in your wardrobe. Newst exquisite and sexy garter belt for lady and girls. It designed to let every women full of confidence. You will fall in love with it in the moment you put it on. 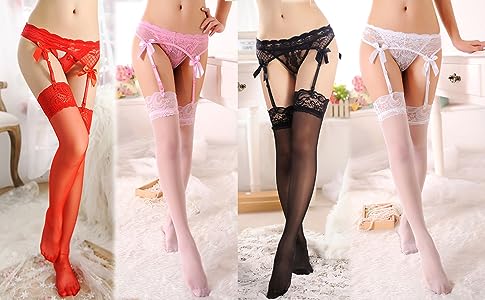 Made of exquisite hollow lace matching with big bow designed, looks sexy and cute. Every night will be Romantic and Warm with your husband or wife. 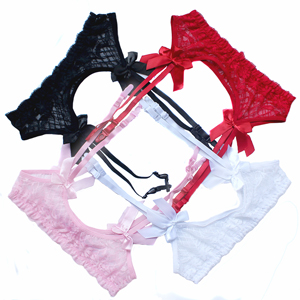 Hand washed ( Clod ), Do not bleach

One size fits most all;garter belt can be adjustable

Suitable for yourself, or a gifts for your wife or lover 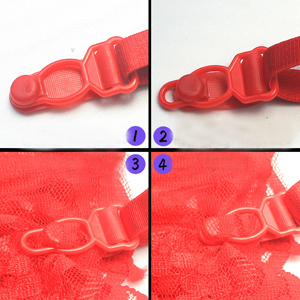 The garter belt feature with four plastic clasp,can be worn with thigh-high stockings to create a sexy look. 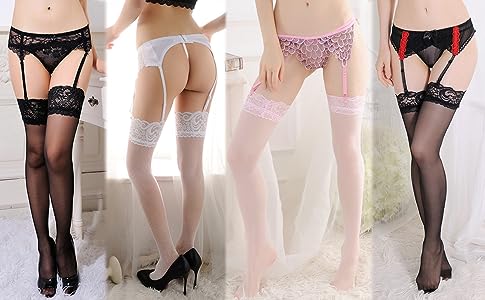 Newst exquisite and sexy garter belt for lady and girls. It designed to let every women full of confidence. You will fall in love with it in the moment you put it on. 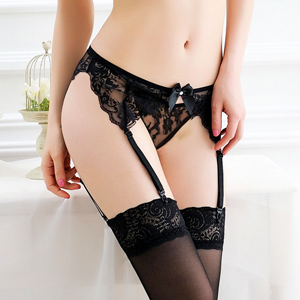 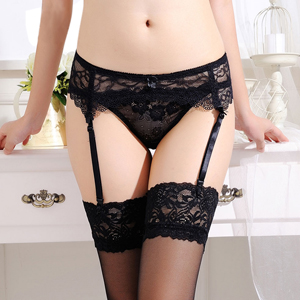 Perfect to match with skirts, dresses, corsets and sexy lingerie in your wardrobe.

Imported
Elastic closure
Free sizes fits S/M/L for women who of height 150-170cm and weight 90-130lbs. TAKIYA lace garter belt are very soft and looks pretty. You will fall in love with it in the moment you put it on.
Perfect to match with skirts, dresses, corsets and sexy lingerie. This lace garter belts and stocking sets gives pretty looking for every women, chariming and attactive, stylish.
Combined 15% spandex and 85% nylon, achieving good extensibility, tensile strength and elasticity. 4 Ribbon Silk Straps with secure plastic clasps for attaching lacy garter belt to thigh high stockings.
Thigh high stockings helps to relieve calf muscle from fatigue, and also help to perfect leg slimness. It designed to let every women full of confidence.
Package includes: 1 * garter belt , 1 * g-string panty, 1 * stockings. Please feel free contact TAKIYA store if you have any problem whenever, we will try us best to help you slove it. 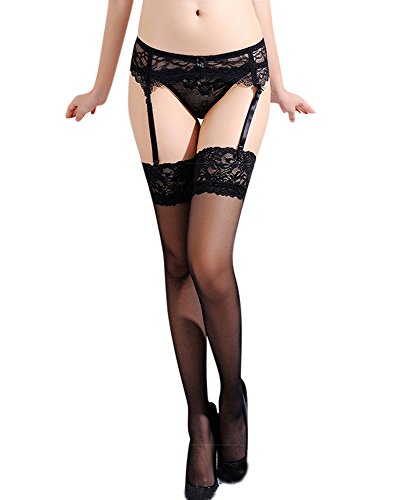 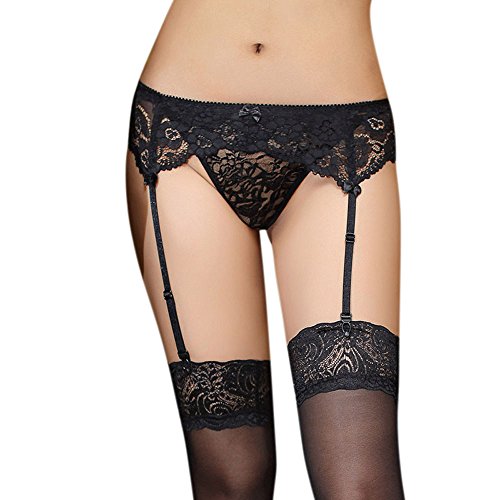 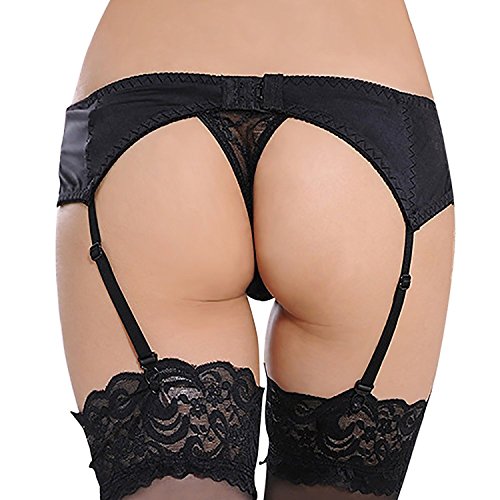 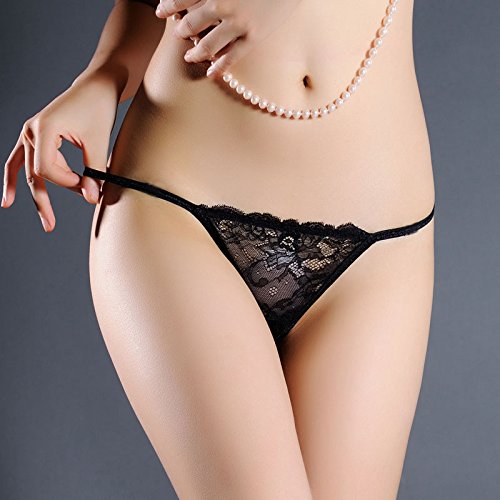 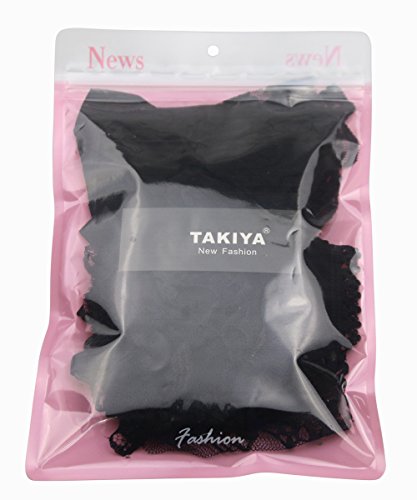 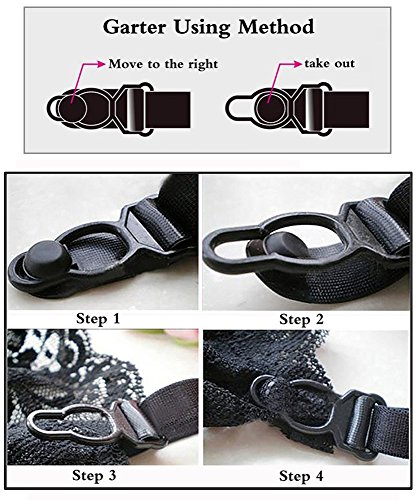 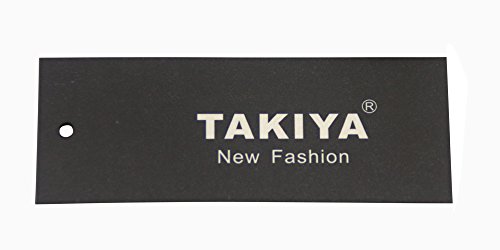 Suspender or garter belts are one of the most frequent subjects of men’s fantasies. As well as the one that is putting on is not left out from their fantasies and also desires.

Suspenders or garter belts are a tough selection according to some, yet they continue to be a tool of substantial seduction for a great deal of females. Here we discuss why as well as just how to take the plunge.

Stockings and also their suspenders owe their attractive story to the creation of nylon. In 1939 the first nylon stockings were presented in the United States as well as were the prompt success that democratized sexy legs. Before then, only available in costly as well as delicate silk, the brand-new nylon stockings as well as garter belts came to be an accessory of everyday life and also their usage included Europe et cetera of the globe after the war.

The garter belt or suspender, with lace stockings ended up being an unavoidable weapon of seduction. Till the creation of leggings by Dim in 1960, some ripped off by drawing the line on the back of their legs giving the impression that they were wearing stockings. While the shortening of the skirts and the emancipation of the lady replaced most stockings by tights and also pants, garter belts and also suspenders still remained a promise of extravagant seduction.

Wearing of stockings is a dream that would thrill as a lot the female that wear them as the guy that are asking yourself. Does she put on stockings or leggings? This sensual information is disclosed in time … with a garter discreetly unveiled during a subtle maneuvering, or later on at night …

Tool of global seduction, symbol of attractive lingerie, stockings with suspenders or garter belts send out strong sensual messages which thrill most males. In addition to an aestheticism of the indisputable silhouette as well as soft legs, the real motivation of these gentlemen would certainly be simpler accessibility to the trousers (if you put on one). On the females’s side, using stockings and also a garter belt is identified with outright temptation. Self-confidence goes to its optimal, as well as you really feel sensuous as well as sexy. Stockings attract attention as an attractive device and necessary for very interesting games between fans.

This is an excellent subject of debate, and also it is an excellent balance in between practice and looks. The garter belt need to for functional factors be put on underneath the panties to be able to get rid of the last without removing the stockings. Cosmetically, it is frequently worn on top. For a sulfurous evening placed it ahead, sexy effect guaranteed. Or use your suspenders as well as stockings without panties to fix this dilemma, yet that’s still another tale!

Start by affixing the garter belt to the preferred elevation and afterwards place on the stockings by carefully pulling them on your legs. At pointer, loosen the suspenders as well as attach the front ones to the top of the stockings. Then comes the fateful minute of the back hooking, this is where all the efforts of your gorgeous preparation can be wrecked. Quit the 10 minutes of difficult deal with your head upside-down, sit on the edge of a chair or put your foot on it so the hooks will certainly be at hand. Lastly readjust the height of the garters to really feel comfortable with your activities.

Concerning 8 out of ten men like to see their ladies in hot lingerie such as stocking with garter belts rather than entirely nude. And to finish the everlasting argument, the suspenders with stockings is without a doubt what they prefer, or at the very least for 61% of them.

It shows up that 6 out of 10 ladies wear only wear leggings, attempt to put on stockings! They are horribly attractive and also really positive to wear, plus they are the source of joy for males. With a garter belt, they are certainly much less practical, yet that makes a substantial result on your partner.

If you use mismatched colors of stockings and suspenders, recognize that generally, males do not locate it really sexy. But they do not agree among themselves, however it is better to have minimal match in between your suspenders as well as stockings. Research reveals that the majority of ladies are concerned to match their lingerie.

Lastly, with an event coming close to such as a dating or marital relationship wedding anniversary, 8 out of 10 ladies like to buy lingerie especially for that event. It is understood that guys like sexy lingerie to spice up their nights as opposed to sex toys. Yet if we scrambled our practices?

As you all know, it’s no secret that females enjoy attractive underwear. While males often like to take a look at ladies putting on underwear, women like to use them all the more. Excellent lingerie can make a female sensual no matter what kind she picks. From a personal viewpoint, putting on sexy lingerie can give her an extra self-confidence in her and makes her reconnect with her internal goddess. This feeling of self-confidence in her sex appeal is simply among the reasons ladies enjoy lingerie!

Over the centuries, women have used lingerie in different ways and also for different factors. Although corsets have actually lately started to gain back appeal, they were classy up until about 60 years earlier. At that time, ladies linked themselves in bodices to obtain what was once called a wasp waistline. It was preferable at the start of the 20th century that females had a little waistline. Consequently, girls were frequently put in corsets at a young age to prevent their waist from growing. It was awkward, undesirable and also simply restrictive. Nowadays, females like bodices as well as lingerie for various other factors. For most of them, the means they feel the fabrics on their skin as well as the appearance that the underwear provides is sufficient!