SAVE 10% when you add 2 or more sofsy Lingerie or Hosiery products to your basket. Code: SOFSY200PLEASE NOTE GARTER BELT AND BRIEFS ARE NOT INCLUDED!
Please use size chart provided in image gallery!
Don’t you hate it when you put on a brand-new pair of stockings — and they instantly ladder or tear? Or start to sag after just one wear? Once you try sofsy Thigh-High Stockings, you’ll never go back! These premium thigh-highs are made of SILKY, 15 DENIER nylon that has an ultra-sheer, sexy look. At the same time, our stockings are SUPREMELY DURABLE and resist runs and snags. They’re MANUFACTURED IN ITALY, known for its high-quality hosiery. Compared with other 15 denier sheers, ours stay looking smooth and gorgeous wear after wear thanks to higher quality materials and our special manufacturing process. The stretchy nylon provides a FEEL-GOOD FIT while also retaining its shape (won’t sag!). Plus, unlike other thigh-highs that cut into your skin, our TOP BAND IS SOFT AND COMFORTABLE yet maintains its tension and elasticity over time.
sofsy Thigh-High Stockings are designed to be worn with our suspender belt (not included) to create a sexy, timeless lingerie ensemble. Wear them to work, under evening wear, on your wedding day, or on their own! AVAILABLE IN SMALL, MEDIUM, LARGE and X-LARGE. We pride ourselves on our accurate sizing. SEE THE SIZING CHART for help choosing the perfect fit.
Backed by The sofsy Promise – our 100% MONEY-BACK QUALITY GUARANTEE!
Click “ADD to CART” to BUY NOW!
PLEASE NOTE GARTER BELT AND BRIEFS ARE NOT INCLUDED!
Imported
Italian-Made Quality: Our exotic lingerie stockings are manufactured in Italy, known for its high-quality hosiery. Pair with a garter or suspender belt (not included) for an ultra-sexy look.
“Stay Up,” Comfortable Design: Silky, stretchy nylon fabric provides a comfortable fit (like a second skin!). Yet these pantyhose retain their shape and won’t sag after repeated wears.
Durable, No-Run Nylon: Our 15 denier hosiery is sheer and transparent, yet it’s strong and durable, too. You’ll feel the superior texture as soon as you take these out of the package!
Soft, Non-Irritating Thigh Hem: Plain banded top won’t cut into your skin like inferior thigh-high stockings. Enjoy all-day comfort. Top retains its tension & elasticity after repeated washings.
The sofsy Promise – 100% Money-Back Guarantee: If these aren’t the best ladies’ stockings you’ve ever worn, simply let us know. We’ll issue a prompt replacement or refund, no questions asked. 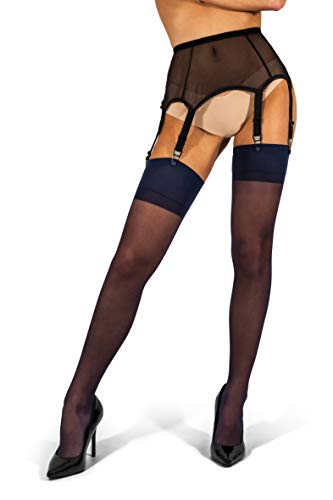 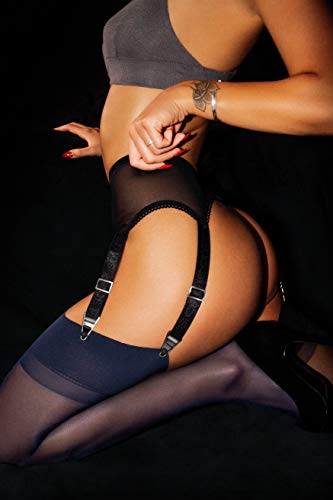 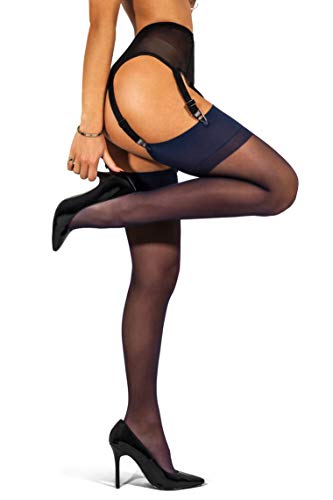 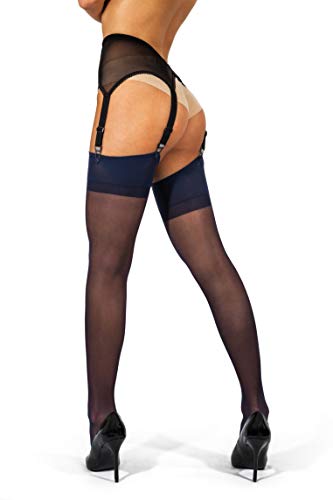 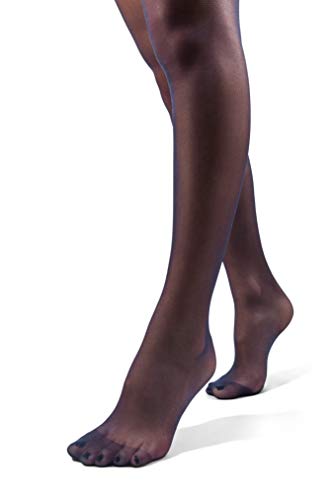 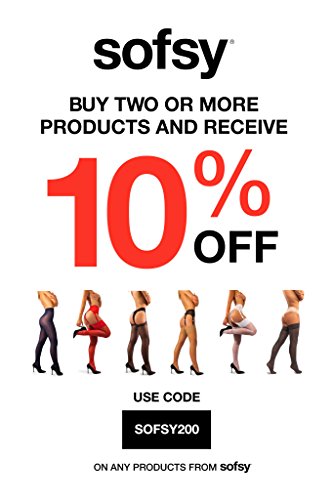 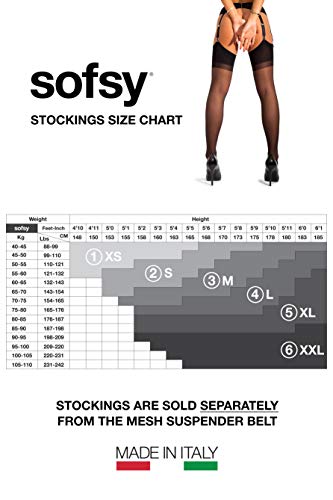 Supporter or garter belts are among the most regular subjects of men’s dreams. As well as the one who is wearing is not excluded from their fantasies and also wishes.

Suspenders or garter belts are a hard option according to some, but they remain a weapon of enormous temptation for a great deal of females. Here we clarify why and exactly how to start.

Stockings and also their suspenders owe their stunning tale to the development of nylon. In 1939 the initial nylon stockings were presented in the United States and also were the immediate success that equalized sexy legs. Prior to after that, just readily available in costly as well as breakable silk, the new nylon stockings as well as garter belts ended up being an accessory of everyday life and also their usage extended to Europe et cetera of the globe after the battle.

The garter belt or suspender, with shoelace stockings became an unavoidable weapon of temptation. Till the creation of leggings by Dim in 1960, some ripped off by drawing a line on the back of their legs providing the impact that they were using stockings. While the reducing of the skirts and the emancipation of the female changed most stockings by leggings and pants, garter belts and suspenders still remained a promise of attractive seduction.

Using of stockings is a dream that would certainly excite as a lot the woman that use them as the guy who are asking yourself. Does she put on stockings or leggings? This sensual information is exposed in time … with a garter subtly introduced during a refined maneuvering, or later on at night …

Tool of universal temptation, sign of hot lingerie, stockings with suspenders or garter belts send out strong sensual messages which excite most guys. In addition to an aestheticism of the indisputable silhouette and also soft legs, the real motivation of these gentlemen would certainly be easier access to the pants (if you put on one). On the females’s side, using stockings and also a garter belt is synonymous with outright temptation. Positive self-image is at its top, as well as you feel sensuous and also sexy. Stockings stick out as a sexy accessory and also crucial for very exciting video games between enthusiasts.

This is a fantastic subject of debate, and it is a great balance in between technique as well as aesthetic appeals. The garter belt should for practical factors be put on underneath the underwears to be able to remove the last without removing the stockings. Cosmetically, it is typically endured top. For a sulfurous evening put it ahead, sexy impact guaranteed. Or use your suspenders and also stockings without panties to resolve this issue, however that’s still an additional story!

Just how to put on your stockings as well as suspenders?

Begin by attaching the garter belt to the desired elevation and after that place on the stockings by gently pulling them on your legs. At tip, loosen up the suspenders and attach the front ones to the top of the stockings. Then comes the fateful minute of the rear hooking, this is where all the initiatives of your gorgeous preparation can be messed up. Stop the 10 mins of hard fight with your head upside down, rest on the edge of a chair or place your foot on it so the hooks will certainly be at hand. Finally change the height of the garters to really feel comfy with your activities.

About 8 out of ten males favor to see their ladies in sexy underwear such as stocking with garter belts rather than completely naked. And also to end the timeless debate, the suspenders with stockings is undoubtedly what they prefer, or at the very least for 61% of them.

It appears that 6 out of 10 women put on only wear leggings, dare to use stockings! They are extremely glamorous and also extremely enjoyable to wear, plus they are the resource of joy for males. With a garter belt, they are absolutely less convenient, however that makes a huge impact on your partner.

If you use dissimilar shades of stockings and suspenders, know that in general, guys do not locate it very hot. However they do not agree amongst themselves, however it is much better to have minimum match in between your suspenders as well as stockings. Research reveals that the majority of ladies are concerned to match their lingerie.

Lastly, with a party approaching such as a dating or marital relationship anniversary, 8 out of 10 ladies like to purchase lingerie particularly for that occasion. It is recognized that males choose sexy lingerie to spice up their evenings instead of sex toys. Yet if we scrambled our practices?

As you all recognize, it’s obvious that women love hot underwear. While men usually like to consider females wearing underwear, ladies like to use them all the more. Great lingerie can make a woman sensuous regardless of what type she picks. From a personal viewpoint, putting on attractive lingerie can offer her a much more self-confidence in her and makes her reconnect with her inner goddess. This sensation of self-confidence in her sex appeal is simply among the factors ladies enjoy lingerie!

Over the centuries, females have used lingerie in various ways as well as for different factors. Although corsets have actually lately begun to restore popularity, they were stylish until about 60 years back. During that time, women connected themselves in bodices to obtain what was once called a wasp waist. It was desirable at the start of the 20th century that ladies had a tiny waistline. Therefore, girls were frequently put in corsets at a young age to stop their waistline from growing. It was uneasy, harmful and just restrictive. Nowadays, ladies like corsets and underwear for various other reasons. For the majority of them, the way they feel the fabrics on their skin and the look that the lingerie provides is ample!