Classy stockings designed to be used with a garter or suspender belt. Beautifully ornamented top and sexy back seam add to its uniqueness.Matte, with invisibly reinforced toes, made from high quality fabric, durable and run resistant. Available in 3 sizes, please check size chart for a perfect fit.

RUN AND SNUG RESISTANT: Made of highest quality fabrics for improved strength and elasticity
BACK SEAM: Always classy, always sexy. Your legs will appear longer and slimmer instantly!
EXCELLENT QUALITY: Made in Europe. Durable and resistant, these sheer thigh highs for women are made for everyday use. Very comfortable, you will forget you have them on. They require a garter belt (not included)
PERFECT FIT: Available in 3 sizes. Please check size chart included in picture gallery for the perfect fit 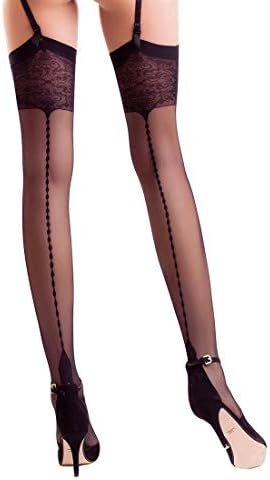 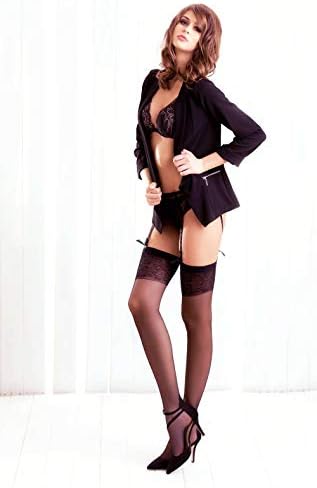 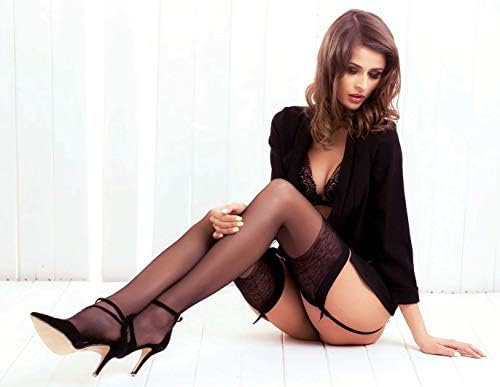 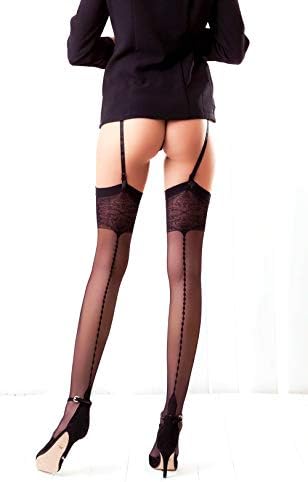 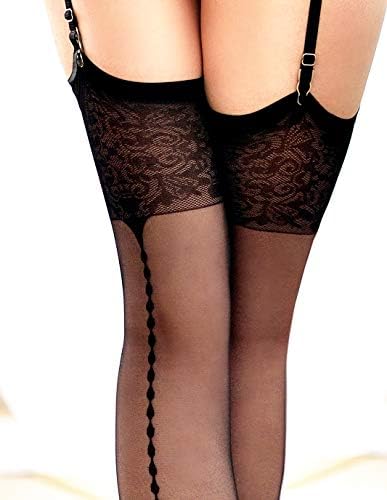 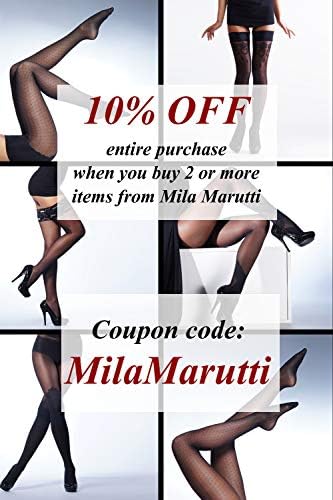 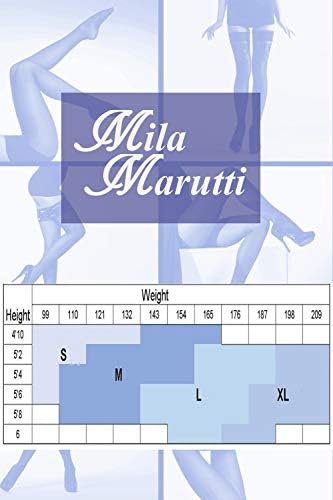 Suspender or garter belts are one of the most constant topics of guys’s dreams. And also the one who is wearing is not omitted from their fantasies as well as needs.

Suspenders or garter belts are a difficult selection according to some, yet they stay a weapon of enormous seduction for a lot of ladies. Right here we explain why and also how to start.

Stockings as well as their suspenders owe their gorgeous story to the invention of nylon. In 1939 the first nylon stockings were presented in the USA as well as were the instant success that democratized attractive legs. Prior to then, just readily available in pricey and breakable silk, the brand-new nylon stockings and garter belts came to be an accessory of everyday life and their usage included Europe et cetera of the globe after the battle.

The garter belt or suspender, with shoelace stockings became an unavoidable tool of seduction. Until the development of tights by Dim in 1960, some cheated by drawing a line on the back of their legs giving the impression that they were using stockings. While the shortening of the skirts and also the emancipation of the female replaced most stockings by tights and trousers, garter belts and suspenders still stayed a pledge of attractive seduction.

Putting on of stockings is a dream that would excite as much the female who use them as the male that are wondering. Does she wear stockings or leggings? This sensuous information is exposed in time … with a garter subtly unveiled throughout a refined maneuvering, or later on at night …

Weapon of global seduction, sign of sexy lingerie, stockings with suspenders or garter belts send solid sensual messages which excite most guys. In addition to an aestheticism of the undeniable shape as well as soft legs, the actual inspiration of these gentlemen would certainly be much easier accessibility to the trousers (if you wear one). On the females’s side, wearing stockings as well as a garter belt is synonymous with absolute seduction. Self-confidence is at its top, and also you feel sensuous and also seductive. Stockings stand apart as a hot device and also vital for very exciting video games between fans.

This is a fantastic topic of debate, as well as it is a good balance in between method and visual appeals. The garter belt must for practical factors be used below the panties to be able to get rid of the last without removing the stockings. Cosmetically, it is often worn on top. For a sulfurous evening put it on the top, attractive result assured. Or wear your suspenders and stockings without panties to solve this dilemma, but that’s still an additional story!

Begin by connecting the garter belt to the wanted height and afterwards place on the stockings by carefully pulling them on your legs. At idea, loosen up the suspenders and affix the front ones to the top of the stockings. Then comes the fateful moment of the rear hooking, this is where all the efforts of your attractive preparation can be ruined. Stop the 10 minutes of hard battle with your head inverted, rest on the side of a chair or put your foot on it so the hooks will certainly be at hand. Finally readjust the height of the garters to feel comfy with your motions.

About eight out of ten males like to see their women in hot lingerie such as stocking with garter belts as opposed to entirely nude. As well as to end the infinite discussion, the suspenders with stockings is certainly what they favor, or a minimum of for 61% of them.

It shows up that 6 out of 10 women use only use tights, risk to wear stockings! They are horribly attractive and very positive to use, plus they are the resource of happiness for males. With a garter belt, they are definitely much less convenient, but that makes a huge impact on your companion.

If you wear mismatched shades of stockings and also suspenders, understand that as a whole, men do not find it really hot. However they do not concur amongst themselves, yet it is better to have minimal suit in between your suspenders and stockings. Research study shows that the majority of females are worried to match their underwear.

Lastly, with an event coming close to such as a dating or marriage anniversary, 8 out of 10 females like to acquire lingerie especially for that event. It is known that guys choose attractive lingerie to enliven their evenings as opposed to sex toys. But if we jostled our routines?

As you all know, it’s clear that women love hot underwear. While men frequently like to look at ladies using lingerie, women like to wear them even more. Great underwear can make a woman sensual regardless of what type she chooses. From an individual point of view, using sexy underwear can give her a more self-confidence in her and makes her reconnect with her inner goddess. This sensation of confidence in her allure is just among the factors females like underwear!

Over the centuries, ladies have used lingerie in different methods and for various reasons. Although bodices have recently begun to regain appeal, they were fashionable until regarding 60 years back. At that time, females connected themselves in corsets to obtain what was as soon as called a wasp waist. It was desirable at the beginning of the 20th century that females had a small midsection. Because of this, girls were often put in corsets at a young age to avoid their midsection from expanding. It was uncomfortable, harmful as well as simply limiting. Nowadays, ladies like bodices and lingerie for various other reasons. For most of them, the means they really feel the textiles on their skin as well as the look that the lingerie provides is sufficient!